Hope all of you are having a lovely Fall season. Amazingly, we are in the last quarter of 2018 and the holiday season is just around the corner. Seems like we just completed the summer film camp project (and attended the premiere!) and now we are in production at three M- DCPS sites! The past few months have been extremely busy for my staff and I as we have entered our 26th year of inspiring filmmakers! The 2018-2019 school year started in late August- and, as usual, FFI’s current programming schedule has been nonstop and there have been some wonderful and extensive changes made within our award-winning organization! More details to follow in this newsletter but first let’s address the biggest news!

The Florida Film Institute, in partnership with the School of Entertainment & Design Technology (SEDT) at Miami Dade College – North Campus, has launched a dual enrollment incentive for those high school students interested in pursuing a career in film or television. The dual enrollment program offers qualified students the option to earn credits towards their associate and bachelor’s degrees with the college. FFI is able to provide this program as a direct result of being awarded a Youth Development grant from The Children’s Trust. We are so grateful to be able to give this to local teens who meet the program criteria!

What makes this so special and wonderful for us is that FFI is the very first organization in South Florida to offer a dual enrollment program in filmmaking. This expansion of our current model gives students an amazing opportunity to earn free college credit in filmmaking while learning. The 1st semester is focusing on Screenwriting (short film project) and the 2nd semester will focus on Film Production (music video project and narrative film). It has been proven that the CINEMA program does an excellent job of teaching the basics of the craft while providing a unique educational experience of creating a project in a team based setting.

There has been a lot of well-deserved recognition lately for our students and a few of our films have continued to be submitted and some accepted into many local, national and international film festivals! We anticipate that the projects produced this school year will also be doing well this time next year on the film fest circuit! Stay tuned for more info, of course we will be posting updates on all of our social media sites!

The three Miami-Dade county public schools that are participating in the 2018-2019 Cinematographers in Education and Media Arts (CINEMA) program are John A. Ferguson Senior High School, Westland Hialeah Senior High School and Young Men’s Preparatory Academy. All of these sites are working off of the same production schedule. For the first semester, FFI is teaching SCREENWRITING 1 and all students have been writing scripts for a short film project. The best script will be selected at each site and the projects will be filmed in the Spring.

In mid June 2018 FFI started production on our annual summer film camp which was held at The Coral Gables Art Cinema. The short film

A-N-N-A was written, produced and directed by our amazing stars, the teen filmmakers from around the local community. It was a great experience for all of the cast and crew. A-N-N-A premiered at The Coral Gables Art Cinema on 9/15/18. Thanks to all who attended the screening — we are so proud of our student filmmakers and can’t wait to submit this project in to local and national film festivals! Congrats to all of the cast and crew! 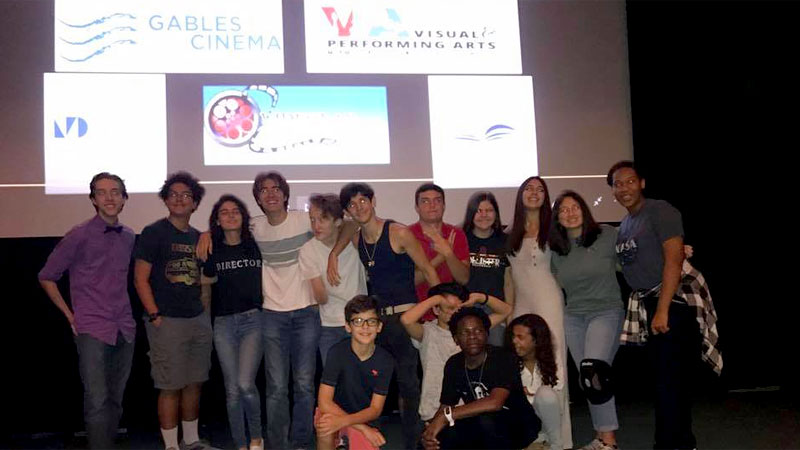 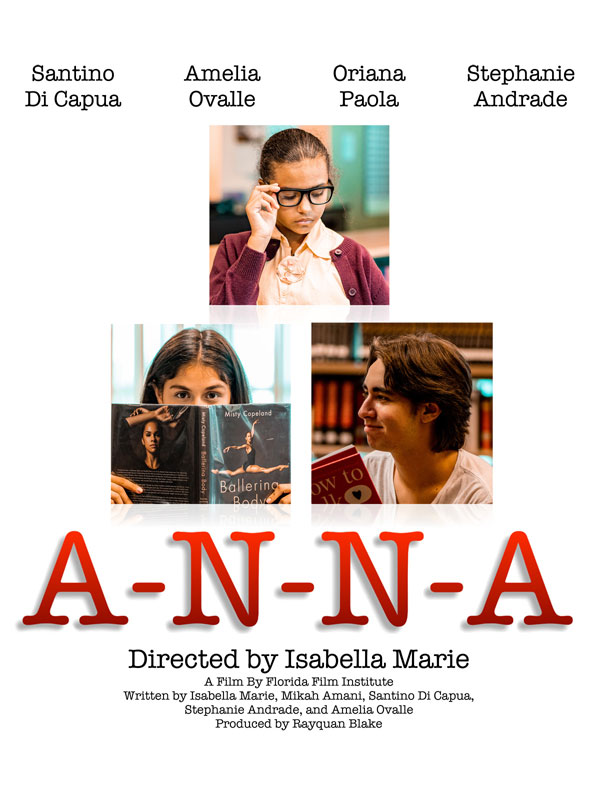 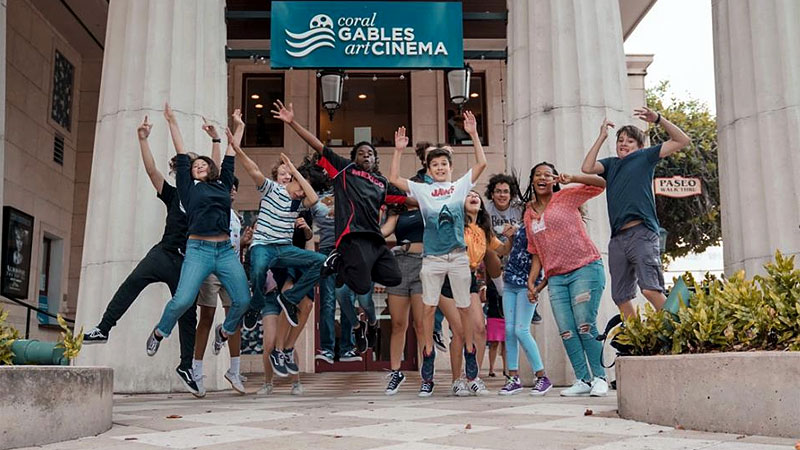 Camp and registration info can be found at the following links:

Studying both Music and Music Business at Miami Dade College, Khaleel is earning his name as a sound engineer, practicing the different aspects of recording, editing and mixing. While working as a studio assistant at the college, he works for independent films as a location sound recorder and post-production sound mixer. After performing in the Emmy Award-winning ”video game concert” in 2016, he focused on working behind the scenes. In the following video game and anime concert (2017), Khaleel worked as stage manager and one of the post-production engineers.

Tommy Demos is the producer and director of seven award-winning films and earned his MFA in Film Production from the University of Miami in 2010. He is a full-time professor of Film, Television & Digital Production at Miami Dade College where he teaches courses in producing, directing, editing, motion graphics and animation. He is currently pursuing a Doctorate in Education while finishing post-production on his first feature-length narrative film, a thriller produced in Nicaragua in August of 2017.

I am a young Visual Arts artist. I am originally from Cuba, I came to this country when I was ten years old and ever since then my passion for Visual Arts has just gotten deeper and deeper. Visual Arts for me is not just a career or a hobby, it is also a way of expressing myself and showcasing my emotions as an artist. As a kid I remember being the one wanting to always take the group picture or trying to film all the family moments with an old camera my dad had. I finally started pursuing my passion with the help of Florida Film Institute and the help of my High School teacher who inspired me and taught me that I can be anything and achieve anything I propose myself in life. “Photography takes an instant out of time, altering life by holding it still – Dorothea Lange”

Juan Moreno will be celebrating his 20th year as a teacher during the 2018-2019 school year! He currently teaches Film Studies at John A. Ferguson Senior High School in West Kendall. The Film Studies program at Ferguson is part of the school’s DASH Visual Marts Magnet. The program is comprised of four years of study in the cinematic arts as well as International Baccalaureate Film Studies, a rigorous advanced academic program. Juan is proud of Ferguson Film; graduates of the program have moved on to prestigious films schools as well careers in the film industry. Many of his “kids” are also alumni of the Florida Film Institute!

Congrats to all the filmmakers! 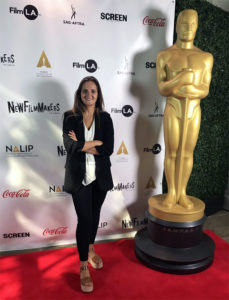 Marta is studying Film Production at Santa Monica College in California. Even though she has not started making any productions yet (that will happen in the Spring), Marta has told us she can see FFI’s impact! For example, in her screenwriting classes Marta is learning some things that she already knew about from attending FFI’s 2017 summer film camp! Marta was given the opportunity to represent FFI and the film TUNED IN which screened at The Do It Your Damn Self National Youth Film Festival this past March. Marta loved meeting and interacting with other young filmmakers from around the country! Marta believes that “FFI was an imperative program to be involved in prior to attending college. It was great to have an outlet for my passion at such a young age. The curriculum was so effective and I learned so much about how to make a real film. Even though the filmmaking process can be stressful and exhausting, it is all worth it…. and because of FFI I now know that this is exactly what I want to do for the rest of my life.”

If you are an FFI Alumni and would like to be featured in an upcoming Newsletter please email meagan@flfilminstitute.org with your story and a production pic. Thanks!

SEDT offers training in a variety of exciting careers in creative industries such as computer animation, film production, graphic design, music business, TV production, web design and photography. SEDT is a community of scholars, professionals, and partnerships whose mission is to provide access to an affordable, world-class education by combining technical, theoretical, and practical hands-on experience to empower students to meet the increasing demands of the local entertainment and multi-media industries. In addition, SEDT serves those who are currently employed in the industry and desire to upgrade and enhance their skills.

For more information about MDC-N and its programming, please call 305.237.1696 or check out the website www.mdc.edu/sedt.