Hope all of you are having a prosperous 2019 so far! It is truly remarkable how the school year is flying by and February is already here. Our 2018-2019 school year will be coming to a close in just a few short months from now. As usual, FFI’s current programming schedule has been nonstop and there have been some new and exciting changes made within the organization, including the success of our new Dual Enrollment partnership with MDC-N! More details to follow in this newsletter but first I will give you some of the highlights!

The first phase of the after-school CINEMA program (at three MDCP-S sites) consisted of our students working on multiple experimental film projects- and now, all of those are completed and edited. The second phase of the program started after the New Year and at the moment we have numerous music videos in development. After these are completed the student crews will begin creating short narrative films (which will include a poster, trailer and behind the scenes pics & video). The school year so far has been full of excitement and immense talent from our local teen students! All of them, at each CINEMA site, truly loves learning the craft and the art of filmmaking!

From pre-production development to post production editing these high school teens have really impressed my staff and I! It will be amazing to see all of the projects on the big screen at our annual CINEMA screening and awards show, scheduled for the end of May! There has been a lot of well-deserved recognition lately for our students and a few of our films have continued to be submitted and some accepted into many local, national and international film festivals! We anticipate that the projects produced this year will also be doing well this time next year on the film fest circuit! 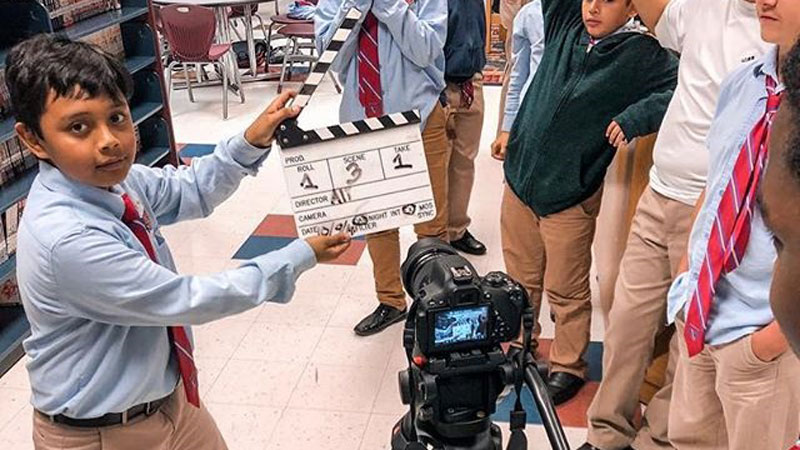 John A. Ferguson SHS, Westland Hialeah SHS and Young Mens Prep Academy have completed the first semester with the SCREENWRITING 1 component. The students learned about formatting scripts, story structure, cinematic language and dialogue/character development. Each of the sites filmed a 1 min. piece and some of the projects have been posted on our Instagram page! Check them out by clicking on the following buttons:

A Day in the Life & Grave Mistake
“GONE” 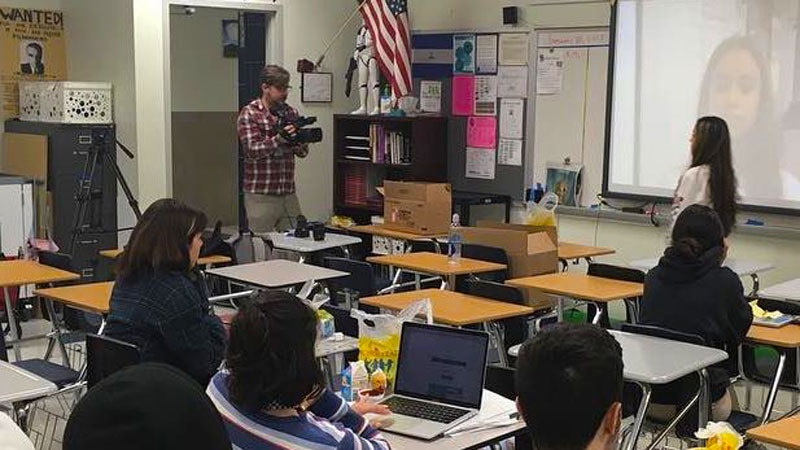 The same three schools listed above have recently embarked on their journey for second semester! The material for the FILM 1 component of CINEMA includes intro to the camera, editing process, visual composition, brainstorming/creative concepts and directing. The projects that will be created from this phase of the program include a music video and short narrative film. 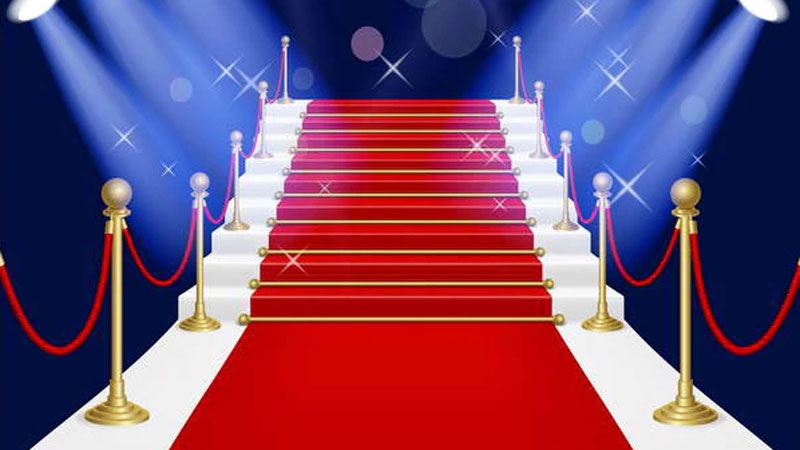 The 2018-2019 CINEMA screening & awards event will be held on Wednesday, May 29th, 2019 @ 10am. The event will be held on the Miami Dade College, North Campus and is free and open to the public. If you are interested in attending please send Meagan an email to RSVP: Meagan@flfilminstitute.org or call the FFI office at 305.891.3456. 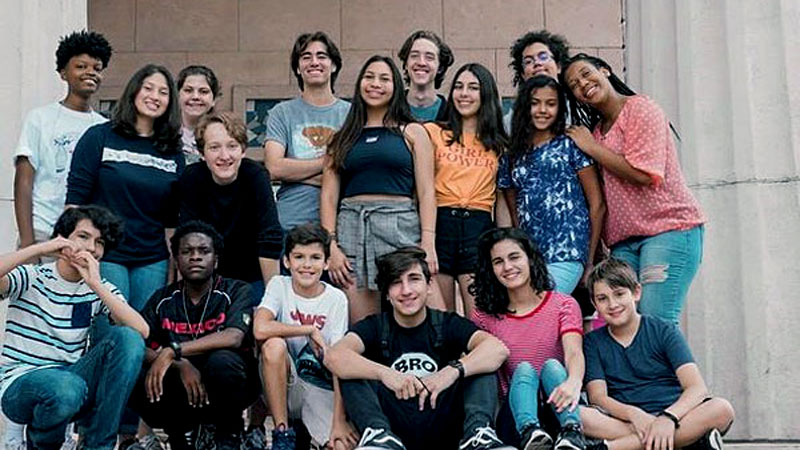 6 week workshop: Mondays, Tuesdays, Wednesdays and Thursdays from 10am- 1pm Coral Gables Art Cinema, June 17 through July 26, limited to ages 13-18. There may be a few scholarships available for high school students that qualify!!!!!! The fee for the 2019 summer film camp $695 plus $50 reg. fee – total of $745. Interested students need to fill out a required registration form and then a phone interview will be set up with the parent and/or student. 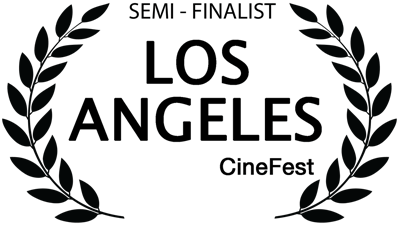 A-N-N-A, the summer film camp project created last June/July has been chosen as a semi-finalist for the Los Angeles CineFest. We have many other films being considered for upcoming film fests so please stay tuned to our social media for all of the exciting updates!

Please, if you are an alumni of FFI/CINEMA and have not completed the alumni survey we sent out a few months ago, we would really appreciate you taking the time to complete this short survey. The data received from these kind of surveys truly help us monitor and understand how our organization has helped our past filmmakers prepare for careers in the entertainment industry!

Please Take The Alumni SurveyAlso- if you are a CINEMA alumni and would like to be showcased in our next newsletter send Meagan an email and let her know what you have been up to and how FFI has helped you in your current field of work or beyond! 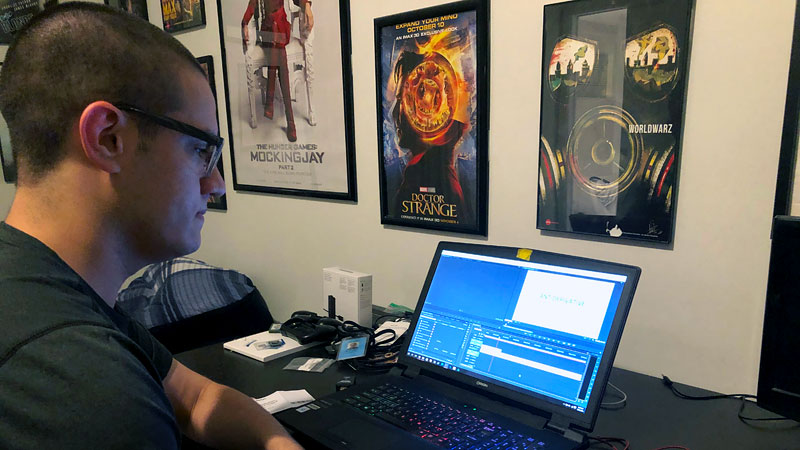 I am an editor with High Functioning Autism. It’s the perfect job for me because I tend to be a loner though I have a small group of friends I keep in touch with. The movie-loving genes came from my parents. The first time I went to the movies I was in a baby carrier. I was just a few months old and the movie was 1993’s “Sliver”. It was nonstop after that. Every week I went with my Dad as a child and now as an adult I go with my Mother and friends. My attraction to editing began when I wanted to become a YouTube content creator. I was 16 and I asked my Mom to buy me a Flip camera and I downloaded editing software. I learned from tutorials on YouTube.

In 2011, My Mom thought it was a good idea to immerse myself in the world of filmmaking. That’s when the Florida Film Institute came into the picture. I attended the Cinerama Saturdays program that year and created the title sequence for our movie “The Purr”. I learned a lot about all aspects of filmmaking not just editing. Then I participated in the 2013 FFI summer film camp which was another great cinematic experience! After graduating high school I decided to get an editing certificate and attended the Center of Cinematography, Arts and Television in 2014. Since my graduation from CCAT, I have finished a few projects.

In 2015, I edited a documentary short, “I AM LIKE YOU”, about a school that teaches Autistic adults how to bake so they can find work and become more self-sufficient.

From 2017 to 2018, I created educational videos for the website Study.com. This gig was great because I worked entirely from home and at my own pace. Unfortunately the video department was phased out.

Last year I did a documentary on the local spearfishing community called “South Florida Sea Hunters.” It was shown at a local film festival and was well received. I just finished a short doc on the Biscayne Bay Kiwanis service organization and soon I will be starting a Halloween docudrama, which will be shown on PBS called “Haunting Florida.”